The White Guard by Mikhail Bulgakov 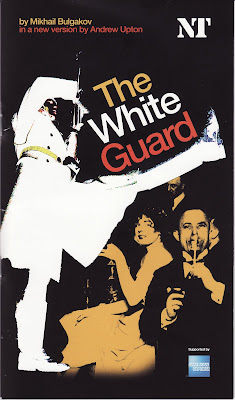 Last seen on a London stage 36 years ago in an RSC production, Mikhail Bulgakov’s White Guard returns to the National’s Lyttelton Theatre in a new version by Andrew Upton.

The story centres on a family called the Tubins and is set in Kiev, the capital of the Ukraine, in 1918. The First World War is coming to an end and the Germans are retreating; the civil war in Russia is in full flow with Nationalist Cossacks, the Russian Red Army and the White Guard (members of the Tsarist army) all fighting for control of Kiev.

The Tubins – the White Guards of the title - are presented in a sympathetic light. In character, the family and their friends are similar to those in a Chekhov play – except they are perhaps not as fully realised. They are a class of people out of tune with their times, whose sense of entitlement coupled with an intellectual and moral inertia leaves them unable to act or seriously influence their own destinies. The tensions in their lives are between the historical reality they are living through and their idealised interpretation of the sort of society they imagine they live in. They are only vaguely aware thet their dreams and nostalgic outlook are actually being overtaken by the advance of history.

However, Bulgakov also shows us that even the privileged (the Tubins) can be betrayed by those they defer to, such as the occupying German forces and their own White Guard High Command. This is most potently illustrated by the flight of Talberg, Elena Tubin’s husband, who leaves his wife and brothers-in-law to their fate in Kiev while he saves himself and his political ambitions by fleeing to Germany. Similarly Shervinsky an aide-de-camp of the Germans’ puppet ruler of the Ukraine changes his position depending whichever rival force is in the ascendancy in order to survive.

This welcome revival of Bulgakov’s play is spectacularly staged: the Tubins’ apartment glides to the rear of the Lyttelton to be replaced by the vast headquarters of the occupying Germans, which in turn is supplanted by the cramped Headquarters of the Nationalist army rising from beneath the stage. These tricks give a sense of the epic scale of the events of the Civil War and how easily individuals can be swept away in the turmoil.

Howard Davies directs a fine ensemble cast. There are notable performances from Conleth Hill as the chameleon like Shervinsky and Pip Carter as the comedic Larion – the Tubins’ cousin.


Lyttelton Theatre
Posted by clivegraham at 20:05