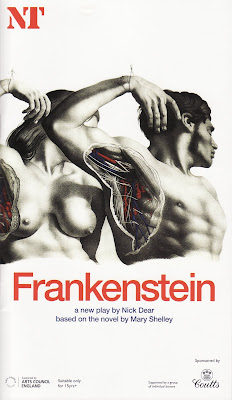 The production is notable – among other things - for alternating the actors playing Victor Frankenstein and the creature. We see Jonny Lee Miller as the Creature and Benedict Cumberbatch Frankenstein. Their performances – and particularly the Miller’s are superb.

The cast also has strength in depth – featuring among others Naomi Harris as Frankenstein’s doomed bride and Karl Johnson as the old blind man who helps educate the so-called monster.

The opening scene in which the creature comes to life is strikingly vibrant. In fact all the staging, the set and lighting are brilliant – as is the soundscape and music.

For once the Olivier revolve is used not to cover up production or narrative weakness but to enhance the drama. Its use is both spectacular and unobtrusive, if that makes sense. The drama plays straight though for two hours but doesn’t drag; and the narrative drive would lose impetus with an interval anyway.

At the end the ovating members of the audience obscure the views of the curtain call of those who remain seated. I suspect ululation may accompany the ovations after press night.