The Hothouse by Harold Pinter

One of Pinter’s lesser-known works The Hothouse was written in 1957 but not staged until 1980. This might suggest that it is a slight piece not deserving of a revival at the National Theatre. However, in this excellent production its great dramatic and comic worth is made clear.

The action takes place during a drab Christmas day in some sort of institution – but it is not clear if the inmates are ill physically or mentally, the unwilling guinea-pigs in some sinister state experiment or the victims of totalitarian oppression.

The narrative concerns the disintegration of Roote (an excellent Stephen Moore) who is in charge of the institution and the power struggle between his deputies. The two deputies look alike and have similar hairstyles and mannerisms – but one (Gibbs) wears a dark suit while the other (the appropriately named Lush) wears grey. Both are foppish and camp, but also threatening and manipulative.

These three men discuss the death of one inmate and the fact that another has given birth, although no one at this stage appears to know who the father is. The confusion is added to by the fact that inmates do not have names but numbers. A depersonalising device certainly but also drawing a parallel with the holocaust.

There is one woman in The Hothouse, which leads to the question - does Pinter really ‘get’ women? They’re always quite strange is his plays – either submissive before the powerful alpha male or tough and harsh towards those lower down the masculine alphabet.

In The Hothouse Miss Cutts – so called perhaps because she does indeed cut to the nub of things - is no exception. Lia Williams gives a fine highly mannered performance as this inconsistent and ultimately unknowable character. She is both the mistress of Roote and appears to sexually available to Gibbs but not to another character revealingly named Lamb. This latter person is new to the institution He has recently been transferred to it and is not sure what his predecessor did or indeed what his own job consists of.

Much of the story is advanced by monologue – describing what has happened, but with characters going off into surreal leaps of logic and comic tension building repetition. However there is also action - the torture of Lamb for instance, which takes place on a raised platform above the stage. This gives the scene an added edge because of the seeming narrowness of the performing space and the fact it is open to a huge drop. We are anxious both for the character and for the performers many feet above the stalls.

In contrast to Pinter’s other early plays, where names give no obvious clue to character, those in The Hothouse have names that echo restoration comedy, signifying character traits. Roote – because he does with Miss Cutts as well – it turns out - as the female inmate who has given birth on Christmas day, Lush because he drinks, Gibbs because his is glib and Lamb because he is: both meek and a lamb to the slaughter.

In the end the patients rebel. Someone has left a door unlocked and all the staff – with the exception of Gibbs – are killed. This uprising is done entirely in sound: the unidentified cries that have been a random part of the production so far reach a crescendo and a band of red light lights bisects the stage to dramatic effect.

In an epilogue Gibbs explains to his government superior that the person responsible for leaving the door unlocked was Lamb – who thus becomes a scapegoat.

This is a well-performed, immensely funny play. It feels simultaneously part of 1957 yet also modern. There are Pinter’s usual themes of power bullying and silence and it is both political and personal. Altogether a very good revival and a welcome opportunity to see one of Pinter’s less well-known works.

Lyttelton Theatre
Posted by clivegraham at 16:53 No comments: 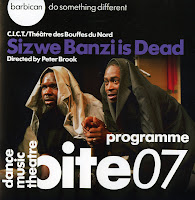 This play is strongly associated with the South African actors John Kani and Winston Ntshona who devised it along with Athol Fugard. Indeed the original cast recently revived it to great effect at the Lyttelton Theatre on the south bank.

Peter Brook’s new production provides a welcome opportunity to see another version of the play within the space of a few short months. It is performed in French by francophone African actors. Non-French speakers in the audience are aided by surtitles – so it’s no more complex than watching a sub-titled film.

The play is staged simply: what is in the performing area can almost be considered ‘found’ objects. Among other things there are a couple of flats that double as signs for “Styles the Photographers” and are reversed to hang clothes. The lighting is straightforward too. Yet in this simplicity there is great power. The seemingly discarded becomes a significant environment for the characters and thus mirrors their position in an apartheid society.

What this production also does is demonstrate that the play is not just a historical document from apartheid era South Africa but has relevance for the world today. Its critique applies to any society which oppresses its members.

Habib Dembete and Pitcho Womba Konga inhabit their roles completely. Dembete in particular gives a stellar performance as both Styles and Bantu, showing the intelligence and cunning needed to survive within an oppressive regime. In contrast Konga as the eponymous Sizwe Bansi shows the political and social awakening of a naturally good-natured person. He is a stirring giant representing the rising anger of the previously dispossessed; a people who are coming to realise that they have been systematically exploited and undervalued as human beings. It is a disturbing and powerful moment of theatre and confirms this play’s continuing potency.

The Pit Theatre, Barbican
Posted by clivegraham at 15:56 No comments: