The Maids is a 20th Century classic of French theatre. Currently it is being staged at Watermans Arts Centre in Brentford in a production directed by Samir Bhamra.

Genet’s play is, in no particular order, a drama about role-play, anger, sexual jealousy fulfilment and violence, class conflict and aspiration, criminality and pleasure.

Although the characters in the play are ostensibly female Genet wanted them to be played by men. He isn’t actually that interested in women. This production had men in the roles for its first week and women for the second. It had also been transposed to India. I saw the production featuring men.

It seems ungenerous to criticise too much. However, one thing soon became clear: this is a play that needs really strong performances. It also demands that there is a clear distinction between the fantasy lives and reality inhabited by the characters. Unfortunately this is not conveyed at all clearly. For example, there is little sense that the ‘maids’ get actual pleasure from their enactments of their employer’s behaviour towards and treatment of them.

Technically the production is also disappointing. The lighting transitions between the maids’ real and fantasy lives are disconcertingly slow; the background music disturbingly abrupt.

The acting is all on a level – again there is no distinction between fantasy and ‘reality’. There is a lack of clarity in diction at times as well, so words are swallowed and meaning lost. And the choice to play ‘Madame’ as David Walliams was quite simply wrong.

Despite my criticisms I would, if I could, go back to the Watermans Arts Centre next week to see how this company’s female version of Genet’s masterpiece worked.
Posted by clivegraham at 00:50 No comments: 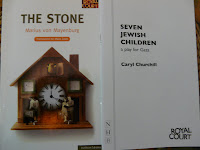 A couple of days ago I went to the Royal Court to see two playsin one evening. The first was The Stone by Marius von Mayenburg and the second Seven Jewish Children by Caryl Churchill.

I saw von Mayenburg’s The Ugly One last year (my review is here). This time he deals with the different families who have lived in a house in Germany since the 1930s. The play’s themes are ownership, memory, self-justification and forgetting - as well as 21st century Germans reassessing their relationships with their parents and the history of their country. This includes not only the Second World War – and specifically the firebombing of Dresden and the Holocaust – but also the subsequent division and reunification of Germany.

The time line of the play moves between the mid 30s and the early 90s. The set is a room with no means of exit except through the audience. This echoes the plight of the characters who must - if not comes to terms with their nation’s past – at least begin to acknowledge it – otherwise they are forever trapped.

This is a powerful work that packs a lot of thought-provoking and challenging material into its 75 minutes running time. The cast of six are outstanding.

After a brief hiatus we return to the theatre to see Caryl Churchill’s Seven Jewish Children – her response to the recent events in the ongoing conflict between Israel and the people of Gaza.

An alternative title for the play could be ‘tell her’ as this phrase precedes much of the dialogue. Churchill’s approach is to imagine how an older generation might answer a younger generation's questions about significant events in the history of the state of Israel: how there is a conflict between the desire to protect and the democratic imperative to honesty; the opposition of justification and justice.

The play lasts about 10 minutes and was (obviously) performed on the same set as The Stone. Again the set served the drama well – it’s lack of an exit save through the audience once more acted as a potent metaphor.

Yet again – as with 2006’s Drunk Enough to say I Love You? - Churchill demonstrates her power as a politically engaged and innovative dramatist.
Posted by clivegraham at 19:11 No comments: 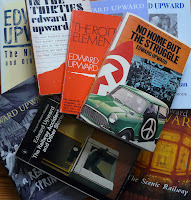 So, Edward Upward's death has been extensively reported. There were obituaries in the Guardian, Times, Telegraph, Independent and Morning Star.

The Guardian's had clearly been written a while ago as its author died himself in 2004. I liked the praise for The Spiral Ascent in the Times and Peter Parker's robust defence of the trilogy in the Independent.
Posted by clivegraham at 17:54 1 comment: