Ivan and the Dogs by Hattie Naylor 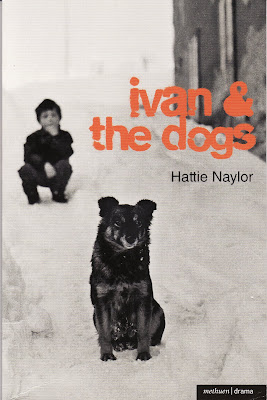 Ivan and the Dogs written by Hattie Naylor is based on the true story of a child who lived with dogs in Yeltsin era Moscow (the 1990s).

A small boy lives with his mother and abusive stepfather in a Moscow tenement. It is a time of economic collapse and the rise of gangster capitalism. Drug use and alcoholism are rampant and civil society seems to be collapsing. The cost of surviving is high. So, unnecessary luxuries – such as pet dogs – are discarded. They live in packs on the edges of cities. Children are also discarded, and the four-year-old Ivan decides to leave his intolerable home environment voluntarily.

The play recounts his experience of trying to survive among homeless adults and children. This is more difficult than might be imagined as both adults and children want to exploit rather than help him. The pack dogs turn out to be different, however. After initial suspicion the dogs and Ivan become mutually dependent; in effect they become a surrogate family.

This inter-species cooperation is a stark contrast to human exploitation and manipulation. Eventually, though, society recaptures the boy at the expense of his canine family. He is taken back into the human system and finds some sort of life despite the fact his mother has died in the interim.

Ivan and the Dogs started life as a radio play and is essentially a monologue. But it is imaginatively staged and has an excellent soundscape to fill out and colour the story.

Polish actor Rad Kaim plays the boy Ivan. His quietly intense performance draws the audience in and ensures the utmost concentration on the unfolding tale. This is an engaging, moving and thought-provoking play, imaginatively staged and directed.

Soho Theatre until 6th November
Posted by clivegraham at 12:33 1 comment: