The Coen brothers’ adaptation of the 1960s novel by Charles Portis is a fine example of a Jacobean revenge tragedy transposed to 19th century USA. 14-year-old Mattie seeks justice – or is it really vengeance – for the murder of her father: amurder that left her siblings orphans and her mother a widow.

Her audacious and indeed courageous pursuit of the perpetrator of the murder is both entertaining and somewhat peculiar. What sort of 14 year old would behave in this way in 1870s USA? The gothic language of the male protagonists, their proclivity for brutal violence, and their justification of this violence by convoluted masculine reasoning is both entertaining and disturbing.

Mattie’s search for ‘justice’ causes damage to others – both human and animal. And the young heroine does indeed get her revenge in the end – actually killing her father’s murderer for herself. But she pays a price. She loses her arm to a poisonous snakebite. She never manages to settle down and marry – surely a prerequisite for a woman in late 19th century USA. Perhaps more significantly she loses touch with those who aided her revenge and when she tries to reunite with them 25 years later discovers one has died days before her arrival and the other had disappeared from history’s record.

In these last scenes we see that the attractive perkiness and determination of the young 14 year old have become closer to cruelty and bitterness – a blight on the joy that she though her revenge would bring.

The film is visually satisfying. There are many striking images: a crow pecking at the dead body of a man hanged high on a leafless tree; snowy landscapes and trudging horses; a vagabond wearing a bear’s head; a decayed corpse harbouring venomous snakes. As for the humans, the Coen’s have assembled a cast whose physical appearance seems to reflect their moral position in the world of the film – all are compellingly distinctive and their characters are explicit in their bodily appearance.
Posted by clivegraham at 18:39 No comments: 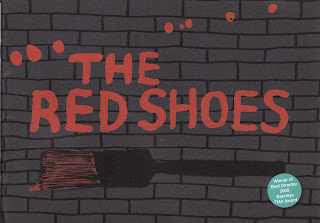 As is usual with a Kneehigh show there is no 4th wall and the performance starts before the actual play. We sit in the foyer waiting for the auditorium to open. Some musicians come down the stairs that lead to the performance area and play tunes. Soon three not so young men in old-fashioned white pants and vests watch them from the balcony above. The musicians go into the adjacent café – still playing – the men in pants follow. Everyone has shaved heads is wearing dark eye makeup.After a while the audience goes into the theatre space. We sit on three sides on uncomfortable seats, but we do have cushions. The windows to the street outside are not curtained so there is daylight in the auditorium. The play is a final revival of a 2001 production. The story is a variation on Hans Christian Anderson’s The Red Shoes. It is about a compulsion not to say addiction that ends in death. The tale is told in a light and foolish manner – but it is also dark and disturbing. There is wonderful clog dancing – such a contrast to the ballet of the recent film Black Swan or, indeed, the 1948 film starring Moira Shearer.This story of endeavour, foolishness and ambition is told in the style that has become and remains the benchmark of Kneehigh shows. There is deceptively simple staging and obvious artifice that disguises the deep level of skill and invention that bring their shows to such extraordinary life. The integration of music, dance, story telling and performance creates an intellectually and emotionally satisfying theatrical event. The brilliant ensemble cast, musicians and technical support receive a deserved ovation at the end of their performance.BAC until 9th April
Posted by clivegraham at 20:17 No comments:

This film is directed by Darren Aronofsky whose previous work includes The Wrestler and Requiem For A Dream. It tells the story of a young ballerina (played by Natalie Portman) who is in contention for the lead role in Swan Lake.

Her single mother – a former ballerina herself, who did not fulfill all her own ambitions pushes her daughter to be her surrogate in triumph, and malignly dominates her life. Their home environment is pressurized, manipulative and disturbing.

The director of the ballet – a creepy and also manipulative character played with élan by Vincent Cassel – introduces a rival for the role into the equation. It is never clear if this other girl (played by Mila Kunis – who is possibly this decade’s Eliza Dushku) is friend or foe. In fact the style of the film is one of whole-hearted ambiguity: we are often not sure what is real and what are terrible imaginings.

The film has a claustrophobic feel, enhanced by the closeness of the camera work. There are striking sequences as, for example, when Natalie Portman becomes the Black Swan. And in the climax of the film the real and the imagined intermingle to disturbing effect
Posted by clivegraham at 19:40 No comments: