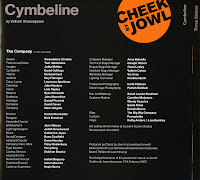 Cheek By Jowl’s Cymbeline is performed in a transformed Barbican Theatre. It is the second Cymbeline of note this year, following Kneehigh’s imaginative and entertaining re-interpretation of this late Shakespeare play at the Lyric in Hammersmith.

Unlike Kneehigh, Cheek by Jowl perform the traditional text but in what appears to be 1940’s style dress. They don’t skate round the paradoxes and inconsistencies of the work – they drive straight through them. But they do it with such panache and conviction that – while the audience may acknowledge the plot’s weak points – it is totally carried along by the strength of their collective performance and sheer narrative drive of the production.

A master stoke in this interpretation is the doubling up of Postumus and Cloten both portrayed by the excellent Tom Hiddleston. He switches between the characters at the change of a coat and the donning of a pair of glasses. Postmus is portrayed as something of an earnest wimp while Cloten is a prancing fool. The latter’s attempts to serenade Cymbeline’s daughter Imogen in the style of say Robbie Williams is a stand out show stopping moment. Hiddleston gives us an egotistical princeling doing a poor impression of a self-conscious and self-satisfied pop star’s less endearing characteristics. It is a masterpiece of multi-layered irony.

Cymbeline himself is a foolish Prince Charles like figure whose second wife towers over him in fine comic style, clutching his head to her chest as she manipulates and patronises him. In addition Jodi McNee gives a stylish performance as Imogen combining intensity and naiveté in equal measure.

The company’s way of leaving characters on stage in scenes they are not involved in – yet are either being talked about or have an emotional impact on - is both satisfying and helps clarify the convoluted narrative.

The staging is simple and sparse. There are few props but those there are are well used. The giant architectural pillars of the Barbican stage (which are normally hidden from audience view) become an essential part of the set as. palace walls or forest trees.

The cast doesn’t fill the stage in an epic sense yet the space around them gives a sense of an epic tale. The distances that are often between performers not only show the emotional but also the physical distances between the characters.

Theatregoers in London are fortunate to have had not one but two lucid, cogent and entirely convincing production of Shakespeare’s problem play this year. And, what is even more remarkable is their total difference from each other.

Barbican Theatre until 23rd June
Posted by clivegraham at 17:32