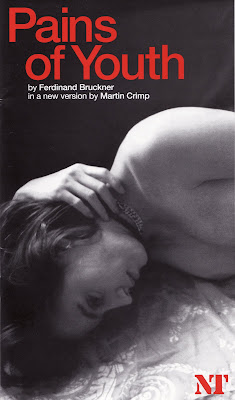 Ferdinand Bruckner wrote Pains of Youth in 1926. The play is set in Vienna three years earlier and is about six medical students and their tangled emotional lives. Relationships within the group are broken and change; there is sexual ambiguity; the characters argue and exploit each other – as well as the young female servant in their lodging house. The action – and dialogue – is often repetitive. It is not clear if this is meant to signify anything – perhaps the characters are going in circles and repeating the same mistakes – or perhaps it is simply a narrative shortcoming.

It all ends badly when one of them, Desiree, commits suicide. Again it’s not clear if her action is due to a general bourgeois malaise or ennui, or if it’s because lesbian relationships are doomed and can only end in death and madness.

However, the language of the play – in a new version by Martin Crimp – is robust and works well – despite, and sometimes because of, its repetitions. The staging is striking – as you’d expect from something directed by Katie Mitchell. The set somehow manages to be both minimalist and cluttered at the same time. There is live music and the soundscape is integral to the production. The performances exude a nervy edginess; which, again, seems to be a characteristic of Mitchell’s work.

The acting is uniformly good, although Laura Elphinstone as Marie and Lydia Wilson as Desiree stand out. Geoffrey Streatfield playing the older and more debauched student Freder also gives a noteworthy performance as a manipulator sliding ever deeper into destructive alcoholism.

The programme for the play contains articles about its historical context – the state of Austria post WWI and the collapse of the Austro-Hungarian Empire, together with the resulting economic uncertainty of the 1920s and the growing spectre of fascism. Allied to this attention is drawn to the progressive and groundbreaking artistic climate of the time which gives the staging much of its meaning and significance. So, we read about Sigmund Freud, Arnold Schoenberg and twelve-tone music, Swedish gymnastics, Javanese dance and the art movement New Objectivity (Neue Sachlichkeit). Although all this helps contextualise the drama in the minds of its audience after the performance, it doesn’t make its meaning any more significant or resonant while we are actually watching.

Cottesloe Theatre until January
Posted by clivegraham at 00:40