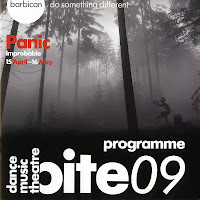 Panic is the latest work from Improbable. They are a theatre group who have been responsible for a number of highly entertaining and ground-breaking works over the past decade or so – Shockheaded Peter, The Hanging Man, Theatre of Blood, Wolves in the Walls as well as a production of Phillip Glass’s Satyagraha at ENO. Currently they are in The Pit at the Barbican Arts Centre.

Panic is about the goat god Pan mainly and consists of a number of short-ish scenes. Some are more obviously Pan related than others. Phelim McDermott – one of Improbable’s founding fathers - is Pan. And there are also three nymphs. In addition, there is live music, sound and a number of filmic projections. As well as this there is imaginative use of brown paper, and rather a lot of paper carrier bags filled with self-help books.

The show starts with the cast breaking the fourth wall, talking directly to the audience and introducing themselves. Then we’re away into the woods and nature in the raw; the Pan story starts on its rambling way.

McDermott parades in his underpants and later straps on a giant wicker penis. He penetrates a dining chair to much hilarity. There are stunning projections on to the brown paper scenery – haunting images of nymphs from previous eras.

In another scene there is aerial work from Matilda Leyser over a recumbent Phelim McDermott that suggests Henry Fuseli’s 18th century painting The Nightmare. But in this instance – and from the audience’s perspective – the view is a mirror image of the picture – possibly because what we now see is a woman demon astride a supine man.

Another visually inventive section is called ‘Panography’ – it is a sort of masturbatory fantasy, with a life-size shadow theatre Pan and the silhouettes of tiny dancing women.

This is followed by an amusing section where Phelim McDermott reads out the titles of large numbers of self-help books. Their titles are self-evidently ridiculous and meaningless, and the scene’s power lies in the fact that it goes on stating the obvious and labouring the point for rather too long –just like a self-help book in fact.

A further striking image is of a large photo of many faces that grows smaller and smaller and ends up as a tears in the eye of a giant photo of Buffalo Bill. It is a powerful – indeed moving - image, but its ultimate meaning or contribution to the Pan theme is not clear.

The cast are energetic and engaging, the production skilful, inventive not to say magical at times; and altogether, this is an intermittently fantastic piece of work demonstrating the infinite possibilities of theatre. However, overall it leaves the feeling of being somewhat less than the sum of its considerable parts.

Pit Theatre, Barbican until 16th May
Posted by clivegraham at 00:03