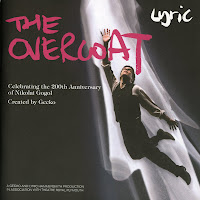 Inspired by the Russian writer Gogol’s short story of the same name, The Overcoat is performed by physical theatre company Gecko.

The clue to their interpretation is in ‘inspired by’ and so the play’s narrative doesn’t match to closely that of the short story. Neither did it especially coincide with my own view of how the story might be brought to 21st century life. In a programme note the director and actor Amit Lahav says he’s dealing with the inner life of the protagonist rather than the detail of the original story. He therefore introduces a romance into the narrative, so that it all becomes – as the publicity tag line has it – ‘get the coat get the girl, change the world’. The original was more prosaic – essentially it was get the coat, get warm in Tsarist St. Petersburg – and was (in my view) more politically intriguing.

However, this take on the story has its own strengths. The central character lives in sordid lodgings. His parents watch him from a portrait on the wall. He has sexual fantasies. His landlady seduces him. Meanwhile he works at meaningless tasks as part of a cog in an office machine.

When there is dialogue in the play it is in the language of its multinational cast – Italian, Chinese, Hungarian, French. What this does is place the onus of communication on body language and tone of voice. It is effective –but, of course, the words could be sonorous banality rather than poetry.

The ‘hero’ eventually gets the coat – but is it at the cost of his soul? Has he made a pact with the devil? Did he really get the girl or was that his fervid dream? The narrative thread is ambiguous.

What is not ambiguous is the talent of the performers. They give a strikingly powerful and committed demonstration of what physical theatre can achieve. There are a number of startling moments and striking tableaux. There are thrills and danger – intriguing lighting. Some of the cast have previously worked with the David Glass ensemble – and this influence is apparent and adds to The Overcoat’s power.

The music – a mix of original composition and existing work – is eclectic in a World/Eastern European fusion style. It does in fact work well.

The night I saw it, the theatre was not full – but the audience response was justifiably enthusiastic.


It finished at The Lyric Hammersmith last Saturday, but can be seen at Theatre Royal, Plymouth from 23 - 25 April.
Posted by clivegraham at 00:06