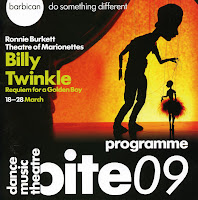 Marionettes are not the same as puppets, and Ronnie Burkett is far removed from any acts with either puppets or marionettes that you may have seen before (and – much as I like it - this includes The Tiger Lillies' scabrous version of Punch and Judy).

This is the story of cruise ship entertainer, the eponymous Billy Twinkle, at the end of his career. In his field of entertainment he employs the marionette – not the puppet. But, bored and disillusioned, he insults his audience, who are not giving him sufficient attention or respect. The implication is that he has become stale and repetitive as a performer As a consequence he is fired from his job which leads him to reminisce about how he came to this line of work and how his life and career subsequently unfolded.

Using the devices of flashback coupled with quotations and allusions to Shakespeare –particularly The Tempest – Burkett relates how he came into this world of string pulling. We learn who mentored him, how he became a leading practitioner of his art and how he has grown tired of what he does. Most importantly, he is confronted by a representative of the next generation of his art. This in turn demands he think about his role and responsibility in passing on his gifts and knowledge – if, indeed he wants to.

The whole show makes us consider who is pulling the strings and why, it examines relationships, significant moments in a life and even the nature of performance.

Burkett is an extraordinary performer. He is a character in the play as well as the person manipulating all the other characters – which adds yet another layer of meaning to the story he is telling. He performs all of the voices of the many different characters. There are even marionettes that are manipulating their own marionettes. It is technically amazing; it is hilarious and yet deeply moving. How is it that these characters made of wood and string can be so real, engaging and sympathetic and yet still deeply stir our emotions? That they do is a tribute to Ronnie Burkett’s talent and ingenuity as performer, writer and manipulator of marionettes.