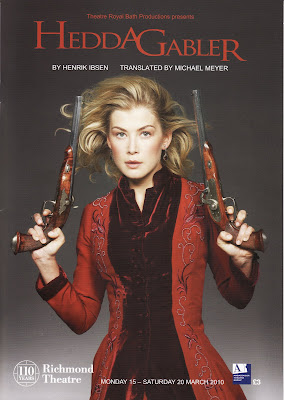 In this touring production originating from the Theatre Royal in Bath, Rosamund Pike shows that Hedda Gabler truly is a female stage character as destructive as Lady Macbeth.

Hedda is bored, spoilt and manipulative; the daughter of a military man, she has recently married the pedestrian academic Tesman. They have just returned from their five-month honeymoon; a time largely spent in pursuing Tesman’s bookish research interests rather than Hedda’s more worldly ones - or indeed, what would be most natural of all, sharing a romantic holiday after their wedding.

The society they return to is small, limited in imagination and conventional. The men in it are boorish, self-obsessed and lacking in empathy. The woman – whatever their station – merely exist to serve the needs of the men.

However, Hedda does have free will and even some power. She chooses to exercise this in a malign and bewilderingly destructive way when Thea Elvsted and Loevborg, figures from Hedda’s and Tesman’s past, re-enter their lives.

In this production sparky young woman are paired with much older duller men. The unattached males are either sexual predators (Judge Brack) or fatally flawed dreamers with a destructive weakness (Loevborg and his alcoholism). The women depict various sorts of service that the male world requires from them – servant, mother substitute, clerical assistant, sexual conquest.

When Hedda destroys the only copy of Loevborg’s major work – having already urged him to suicide – the stage darkens while she burns his book page by page in the stove. There is a palpable sense of evil in the act.

The conclusion of the play is equally chilling. Hedda is ignored while it is agreed that Tesman and Mrs Elvsted will reconstruct Loevborg’s work from his notes, while Judge Brack will cover up Hedda’s role in Loevborg’s suicide – as long as she satisfies his rapacious appetites. She is as entrapped into her suicide as she entrapped Loevborg into his.

This is a compelling play simply and effectively staged. Director Adrian Noble draws fine performances from a strong cast, with Rosamund Pike a notable Hedda.

Now touring to Nottingham and Oxford.
Posted by clivegraham at 18:09