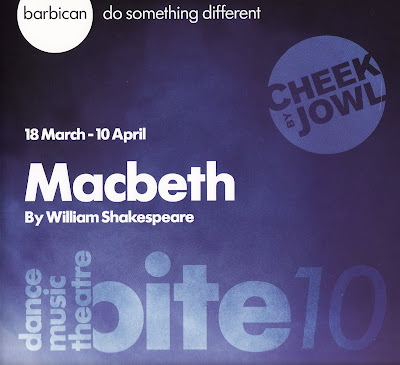 Macbeth – a play of darkness political ambition, violence and brutality, is one that never seems out of fashion. The employment of violence and terror to seize and retain power seems to be constant features of human society. In this sense the themes of Macbeth are universal; they don’t just apply to Jacobean England and Scotland. It is a play frequently performed round the world because people find its story has a resonance for them.

Currently at the Barbican’s Silk Street Theatre, this latest production from Cheek By Jowl is stimulating, stark and dark. The stage is bare and there are no props to speak of: wooden boxes serve as seating from time to time. Fights, battles and murders are mimed; the witches are devolved into the ensemble: as are the many lords and thanes surrounding King Duncan’s court.

Duncan is blind – both literally and to ‘noble’ Macbeth’s machinations. The comic porter scene is grotesque and jarring. The sense of ‘warriors’ bonding in a manly fashion is conveyed well but also illustrates the disjunction between obedience to state demands and the potential abuse of power.

Macbeth is a fast-moving play: the eponymous thane goes from a brave soldier upholding the status quo and overthrowing a potential usurper, to becoming an actual usurper of state power himself in a few short scenes. He quickly gains this power but gets mired deeper in brutality and murder trying to retain it.

He soon alienates most of those around him and clings to his position by employing fear, terror and murderous violence. The only support the Macbeths essentially have is what they give each other and – as they ponder and reanalyse their crimes – this mutual support becomes increasingly vital but difficult.

One of the high points of the evening is Macduff’s response to the news of the murder of his wife and children. The straightforward humanity of his reaction offers a fine contrast to the – in many ways – over-analytical, and essentially self-inflicted torments of Macbeth and his wife. Macduff’s reaction also offers a further contrast to the ambiguity of Banquo’s response to the Witches’ predictions about himself and Macbeth that have set in motion the train of events. It is almost possible to suspect that, had Macbeth not arranged for his murder, Banquo too might have become a player in the dark political game overtaking Scotland.

Will Keen as Macbeth and Anastasia Hille as his wife give fine, edgy performances as the Macbeths move from crime to madness to death, Ryan Kiggell is an ambiguous Banquo and David Caves as Macduff conveys well the possibility for the survival of humanity and responsibility in a volatile and murderous world.